Too much is never enough 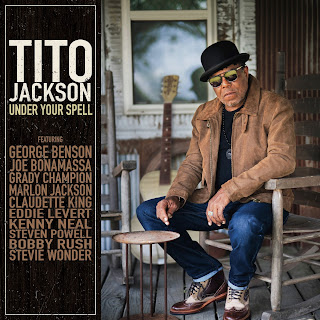 We are in the middle of a huge record label campaign for our Tito Jackson release "Under Your Spell". It comes out tomorrow August 6th on Gulf Coast Records here in the USA. It's a BIG deal for sure. The Jackson 5 was one of my main musical inspirations when I was just a youngster. We have a video thats hitting today for his single "Love One Another" that is just way over the top. We have pulled out all of the stops on this one for sure. The video features Tito singing and playing guitar with his band and cameos from all of the Jackson family: Marlon, Jackie, Germaine, Janet, Latoya, Kim Kardashian, Chloe Kardashian, Magic Johnson, Chris Tucker, and so many other wonderful people sharing the message to stop the hate and "Love One Another". Who would've thought this is what we would be doing when I was 50 years old? Not me!

During this past year I have had ample time to make changes and work on myself. I assume we all have :) One of the things I noticed was that I had WAY too much shit. Like too many clothes, too many guitars, too many guitar amps, too much of everything. I was hoarding more or less because I could. When I began touring hard with RSB I began a process of buying guitars with my pal Devon Allman. We were always on the road and always getting paid and always wanting something new to show off. We would almost try to outdo each other and see what we could show up with next. Then we would get bored and buy each others guitars. It was fun and exciting. I also began to give guitars away, a lesson I learned from Anders Osborne. He told me we need to keep buying guitars and then give guitars away to people who need them. In return more guitars seem to keep pouring in from all directions. I love to give away gear. People think you are such a wonderful person when you give stuff to other people, but to me I am the one that is gifted the most with the opportunity to see someone happy. The Universe continues to put stuff in my path so long as I give it away.

Well, with an entire year off, I had a chance to reevaluate my hoarding. Sophie and I counted guitars last March and the number was 57. I had 57 guitars.That is ridiculous. I can barely play one! So I began selling them and trading them and giving them away. I started to get this feeling I was not playing as well as I could and I needed to be learning more and studying and practicing rather than buying and hoarding. There was plenty of time in my life when I was lucky to own ONE guitar. I never stopped playing that one guitar. I held it night and day, it was everything to me. But that feeling had changed. I never knew what guitar to play or which one I liked. I just messed around all the time and never really got anything done. Since I was out of work for most of the year, those guitars I had hoarded came in extremely helpful. I would sell two or three a month and that would help pay the bills. I began letting go of what I did not need and deciding what I could never part with. I played the guitars that meant the most to me and a lot of the time they were not the most expensive. They had a story, they were from Laura or a friend. Maybe one of them was a guitar I used on an album or a tour that I remembered fondly.

As of yesterday I have 15 guitars. I like almost everyone of them, most I love. I will still buy a new one here or there or mess around, cause that is fun, but I have decided if I don't play it and it does not serve a purpose, it has to go. The same with clothes and shoes and STUFF. This is all part of a pattern that goes back to my childhood. I grew up poor and we never had anything. In the end I realize that none of this stuff matters. It's the music that matters, the love. My family and friends matter and you matter. I will almost certainly continue to enjoy a new guitar now and then, that way I have something to keep giving away to anyone who needs a guitar. The difference is I don't need anything, or not as much as I did a year ago. It's a lesson I have truly enjoyed learning, getting back to basics. I see that maybe I have another 20-30 years on this planet and I don't want to waste my time consuming, I want to give and enjoy. I try to give everyday whenever I can. I don't care if others don't, I don't judge anyone. I save my money for my family to give my children and grandchildren (maybe someday) when I leave this place. I am not chasing anything anymore, I have all that I could ever want or need. I want to expand my music and my growth, but that doesn't require a lot of stuff.

Tomorrow "Under Your Spell" is released by Tito Jackson on Gulf Coast Records. Please order a copy, download digitally or listen to it on a streaming service. It's a wonderful record!